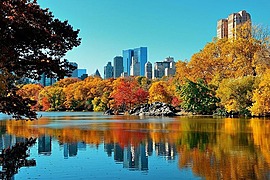 Many experts believe that New York is nicknamed the Empire State because George Washington called New York “the seat of the Empire.” It is known for supplying construction materials such as limestone, salt, sand, and gravel. It’s also one of the top states for garnets, though they’re used for industrial purposes instead of jewelry. And New York is the only state that mines wollastonite, used for manufacturing ceramics and paints.

The College at Brockport