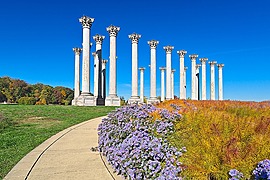 The State of Washington is one of the wealthiest and most socially liberal states in the United States, consistently ranked among the best for life expectancy and low unemployment. Washington is ranked second in wine production, and a leading lumber producer, and the nation’s largest producer of apples, hops, pears, red raspberries, spearmint oil, and sweet cherries. Washington’s largest city is Seattle, with a population of over 680,000. Washington is the 18th largest state and the 13th most populous state in the United States with more than 7.6 million people.