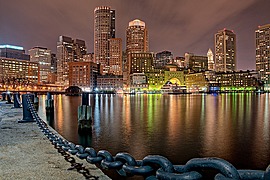 Boston is the capital and most populous city in the Commonwealth of Massachusetts, and the 21st most populous city in the United States with a population of over 690,000 people. The city’s nickname is Beantown due to its popularity of the baked beans. One of the oldest municipalities in the country, Boston is home to many firsts, including America’s first subway, the first American lighthouse, the first US chocolate factory, and the first US public beach. Today, Boston is one of the centers of scientific research, thriving in many areas in colleges and universities, making it a world leader in higher education. The city’s economic base includes finance, professional and business services, biotechnology, information technology, and government activities. Boston’s business and institutions rank among the top in the country for their environmental sustainability and investment.