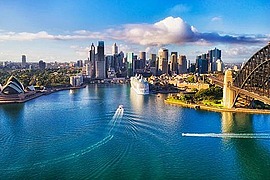 Australia is the largest country in Oceania and the world’s sixth largest country, with a population of over 26 million people. The only country that covers an entire continent, Australia has unique landscapes, natural wonders and extraordinary experiences for its travellers. The country is one of the world’s most ethnically diverse nations, with nearly a quarter of its people born in other countries. Australia also boasts their wildlife, with over 80% of the animals unique for the country. Considered as a highly-developed country and fourteenth on the world’s largest economy, Australia has a high-income economy that generates its income from various sources, including mining-related exports, telecommunications, banking, manufacturing, and international education. The top-rated tourist attractions in Australia include the Sydney Opera House, Great Barrier Reef Marine Park, Sydney Harbour Bridge, Blue Mountains Natural Park, Fraser Island, and Kakadu National Park.