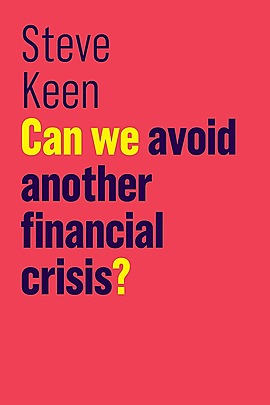 Can We Avoid Another Financial Crisis?

Can We Avoid Another Financial Crisis is a groundbreaking book that shows why the self-declared experts were wrong all this time. It proves how ever-rising levels of private debt make another financial crisis almost inevitable unless politicians tackle the real dynamics causing financial instability. This book also identifies the economies that have become "The Walking Dead of Debt," and those that are next in line, including Australia, Belgium, China, Canada, and South Korea. A major intervention by a fearlessly iconoclastic figure, this book is essential reading for anyone who wants to understand the true nature of the global economic system.

More about Can We Avoid Another Financial Crisis? 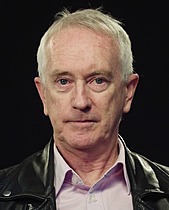 "In this compelling essay, Steve Keen shows that the "Great Moderation" was in fact a great delusion and documents, to brutal effect, the foolish complacency of mainstream macroeconomists."

"Steve Keen explains why the financial crisis it occurred, and why it can't just get better on its own, along its present track. He also explains – in a hilarious and absolutely justified takedown – why mainstream economists have a "trained incapacity" in being unable to understand why the economy has broken down – and hence, why they don’t have a real solution. We are still living in the aftermath of the 2008 crisis. It’s all about debt. But economists fear they will lose their jobs if they say that debts must be written down. Keen asks what is more important: to save the economy, or to save the jobs for economists whose prestige rests on their not understanding why economies are in trouble today."

― Michael Hudson, author of Killing the Host and The Bubble and Beyond

"Non-academics interested in economic or financial markets should, if they read ony one book on the topic, absolutely read this one."

"Mr. Keen is surely right to argue that growth fuelled by the continuing expansion of private debt is highly risky for the overall economy, and that which cannot continue indefinitely will come to a sticky end sooner rather than later. We should heed his advice..."