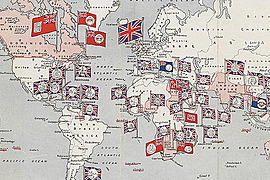 Formerly having the greatest imperial power in history, the British Empire’s decline was a hit directly from the impact of World War II. With the empire’s establishment dating back in the 16th century, the British Empire’s expansion accelerated during the 18th century. It has become the largest empire to have ever existed by 1913, covering around 25% of the world’s land surface, including large portions of North America, Australia, Africa and Asia, while other areas - especially in South America. Then known as “the empire on which the sun never sets”, its decline in 1947 made Britain lose the jewels in its crown, kickstarting a domino effect across the empire. By 1967 more than 20 British territories were independent. Little remains of British rule today across the globe, and it is mostly restricted to small island territories such as Bermuda and the Falkland Islands.

More about Decline of British Empire