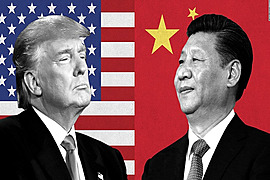 Donald Trump’s Trade War with the world involves multiple battles with US allies and others alike. With the world’s two largest economies locked on a bitter trade battle, the dispute has seen the US and China impose tariffs on hundreds of billions of dollars worth of one another's goods. The trade war has negatively impacted the economies of both the United States and China, with higher prices for consumers and financial difficulties for farmers and manufacturers, and slowed economic growth. As the trade war continues, it reduced international trade, with Trump’s tariffs policy aiming to encourage consumers to buy American products by making imported goods more expensive, and China doing the same. The US has imposed tariffs on more than $360bn (£268bn) of Chinese goods, and China has retaliated with tariffs on more than $110bn of US products.