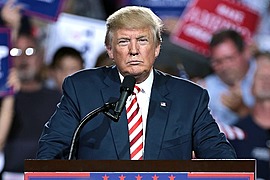 The Presidency of Donald Trump began when he was inaugurated as the 45th president of the United States, succeeding Barack Obama. With his campaign slogan “Make America Great Again”, he had contributed many accomplishments during his presidency. His accomplishments include the 4 million jobs created since the election, with more Americans employed. Trump’s most lasting impact on the country will be the reshaping of the federal judiciary. Trump’s presidency is also marked with declines, some of these declines include the family separations and the deaths of migrant children, his decision to withdraw the US from the 2015 nuclear deal, and numerous environmental protections being rolled back. His final year of term was marked by the COVID-19 pandemic, and he was impeached in the House of Representatives on December 18, 2019.