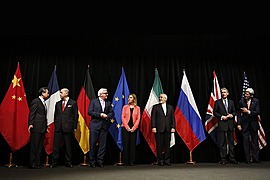 The Joint Comprehensive Plan of Action (JCPOA), widely known as the Iran Nuclear Deal, is a detailed agreement by Iran and the P5+1 countries, namely China, France, Germany, Russia, the United Kingdom, and the United States. This agreement demanded for Iran to reduce their nuclear activities and stockpile, allowing the International Atomic Energy Agency to visit and further inspect their nuclear facilities in exchange for the progressive reduction of sanctions. Considered as one of Obama administration’s crowning diplomatic achievements, President Donal Trump withdrew the United States from the agreement in 2018, despite its top allies such as the UK, France, and Germany disagreeing with it. The United States reimposed sanctions and moved to wipe out Iran’s oil exports, prompting Iran to resume some of its nuclear activities.