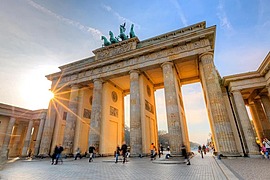 Germany is the second-most populous country in Europe, and the most populous member state of the European Union, with a population of over 83 million people. The country boasts free-tuition universities, high-quality education, and cultural diversity. Germany has been known as the “Land of Poets and Thinkers”, it is home to famous composers such as Bach, Brahms, Schumann, Wagner and Beethoven. Beer has played a big role in German life for multiple generations, the country has the world’s oldest brewery, and Germany is also home to more than 25,000 castles. Known for its long and rich cultural history, Germany has many World Heritage sites and is among the top tourism destinations in the world, with its famous attractions such as the Brandenburg Gate, Cologne Cathedral, Black Forest, Rhine Valley, and Berlin’s Museum Island. Germany is a great power with a strong economy; it has the largest economy in Europe, the world's fourth-largest economy by nominal GDP, and the fifth-largest by PPP. The country’s economy thrives in the industries of healthcare, automotive, construction, information technology and telecommunications, chemicals, and engineering.