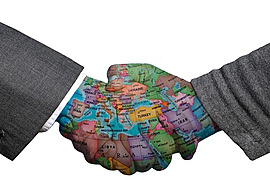 International Agreement is an official document agreed upon by a group of countries that relates to trade, environment, and many more. Governed by international law, it is a treaty or contract among various countries that are also known as treaties, conventions, pacts, acts, declarations, protocols, accords, arrangements, concordats, and modi vivendi. As a legally binding agreement, it customarily includes four to five basic elements, and International agreements underpin much of the everyday business of interna-tional politics. No other mechanism really exists that reflects the explicit agreed preferences of states.