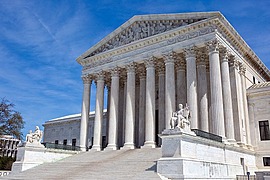 The judicial branch of the federal government interprets the meaning of laws, applies laws to individual cases, and decides if laws violate the Constitution. It's comprised of the Supreme Court and other federal courts. Where the Executive and Legislative branches are elected by the people, members of the Judicial Branch are appointed by the President and confirmed by the Senate.