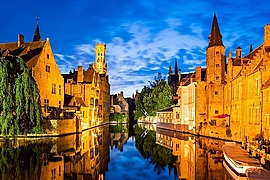 Belgium is a country located in western Europe, known as one of the smallest, and most densely populated European countries. It is a sovereign state and a federal constitutional monarchy with a parliamentary system divided into three highly autonomous regions known as the Flemish Region in the north, Wallonia in the south, and the Brussels-Capital Region. Belgium is a member of the Benelux Economic Union, the European Union (EU), and the North Atlantic Treaty Organization (NATO). With its area and population, Belgium is one of the most heavily industrialized and urbanized countries in Europe, with an advanced high-income economy. It has very high standards of living, quality of life, healthcare, and education.