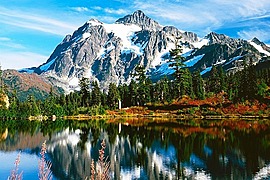 The Pacific Northwest refers to the northwestern portion of the USA bordered by the Pacific Ocean and the Cascade Mountains. It covers primarily the states of Washington and Oregon, but more broadly including parts of California, Idaho, and Alaska. This lush region is known for its dramatic coastline, snow-capped mountains, and lush forests, as well as unique and independent towns and cities.