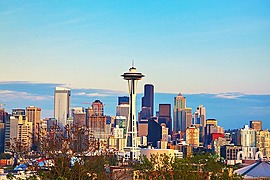 Seattle is a seaport city, and is the largest city in Washington. Seattle is a city of distinct neighbourhoods and urban districts that, though close to one another, change from one street to the next. Its economy diversified with the development of manufacturing, food processing, banking, insurance, and transportation industries in the early 20th century, all of which expanded markedly during and after World War II. Electronics-based industries, notably those connected with software development and manufacturing, became significant in the 1980s and are now the most productive component of the economy. Seattle is a mix of peoples, cultures, and religions and has a higher level of ethnic diversity than is to be found elsewhere in the Pacific Northwest.