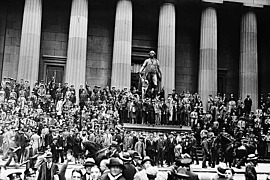 The 1929 Wall Street Crash was initially a period of substantial political, economic and social growth that came to an abrupt end in 1929, when the stock market crashed, leading the way to the Great Depression of the 1930s. It caused a direct impact on nearly every segment of society and altered an entire generation's perspective and relationship to the financial markets, with the Dow Jones Industrial Average having dropped 24.8%, marking one of the worst declines in U.S. history. It resulted in the failure of thousands of banks, and the loss of employment for nearly one-fourth of the workforce, and millions’ loss of life savings. The 1929 Wall Street Crash was considered the worst economic event in world history that had led to the further deepening of an already dire financial situation.