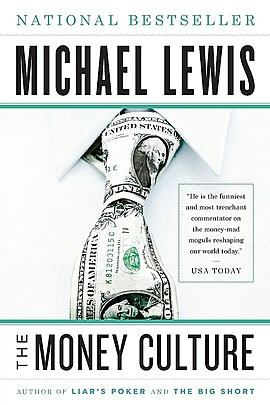 The Money Culture offers a witty, trenchant analysis of the world of high finance in the 1980s and the cult of wealth that produced such moguls as Michael Milken and Donald Trump.This book is a classic warts-and-all portrait of the 1980s financial scene. The 1980s was the most outrageous and turbulent era in the financial market since the crash of '29, not only on Wall Street but around the world. Michael Lewis, as a trainee at Salomon Brothers in New York and as an investment banker and later financial journalist, was uniquely positioned to chronicle the ambition and folly that fueled the decade.

More about The Money Culture

"Lewis wrote a very funny and trenchant book about life as a junior bond trader on Wall Street in the mid-1980s and called it Liar's Poker ( LJ 9/1/89). In this new book, he revisits familiar ground. In essays and pieces that originally appeared in magazines and newspapers, he strolls down Wall Street and takes aim at such targets as Michael Milken, the RJR Nabisco takeover, Louis Rukeyser, the Savings & Loan crisis, the Japanese, etc., and dissects them. There is not much in the way of true revelation here, but, with Lewis's puckish humor and inimitable writing style, the stories are entertaining and thought-provoking. And he proves that "the raw itch for money is still with us as surely as ever . . . and the money on Wall Street is better than elsewhere." This should be a big hit with the readers of his previous book. For all popular nonfiction collections."