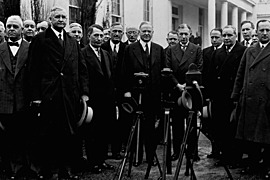 The Reconstruction Finance Corporation was signed into law by President Franklin Roosevelt during the Great Depression. It was a government agency set up to buy failing businesses and invest in public works projects in the years after the stock market crash of 1929. The corporation would then send their bills to the Fed who would pay the bills. Despite intentions to last only 10 years, the RFC stayed in business for decades before being ruled by the Courts as unconstitutional.