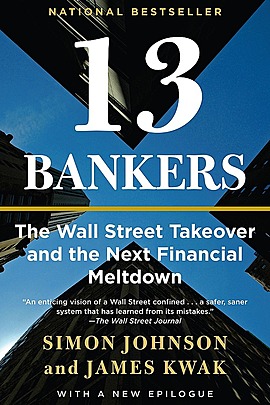 In spite of its key role in creating the ruinous financial crisis of 2008, the American banking industry has grown bigger, more profitable, and more resistant to regulation than ever. Anchored by six megabanks whose assets amount to more than 60 percent of the country’s gross domestic product, this oligarchy proved it could first hold the global economy hostage and then use its political muscle to fight off meaningful reform. 13 Bankers brilliantly charts the rise to power of the financial sector and forcefully argues that we must break up the big banks if we want to avoid future financial catastrophes. 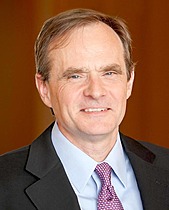 “The best explanation yet for how the smart guys on Wall Street led us to the brink of collapse. In the process, Johnson and Kwak demystify our financial system, stripping it down to expose the ruthless power grab that lies at its center.”

“Too many discussions of the Great Recession present it as a purely economic phenomenon. Simon Johnson was the first to point out that this was and is a crisis of political economy. His and James Kwak’s analysis of the unholy inter-twining of Washington and Wall Street—a cross between the gilded age and a banana republic—is essential reading.”

“Essential reading for anyone who wants to understand what comes next for the world economy. Dangerous and reckless elements of our financial sector have become too powerful and must be reined in. If this problem is not addressed there is serious trouble in all our futures.”

“Beautifully written and powerful. Ties the current financial crisis to a cycle of politics as old as the Republic, and to a pathology in our politics that is as profound as any that our Republic has faced. Required reading for the President, and anyone else who cares for this Republic.”

“Johnson and Kwak not only tell us in great detail how the crisis happened and what we must do to avoid another crisis, but they see the deeper political and cultural context that permitted carelessness and excess nearly to break the financial system and plunge us into a depression.”

“A chilling tale of the dangers of concentrated economic, intellectual, and political power. Even if you do not agree with everything the authors have to say, this book makes it clear why ending ‘too big to fail’ and reforming the institutions that perpetuate it are essential for our nation’s future economic prosperity and, more fundamentally, our democratic system.”

“This book is remarkable in its scope and conclusions. It places changes in financial services and the sector’s regulation over the last twenty years in the context of the last two hundred, and the comparison isn’t favorable. It’s the one book the President (and the Congress) should read.”

“As 13 Bankers makes lucidly and compellingly clear, the problem with Wall Street leads directly to the core problem of our democracy. American politics now feeds on money, and Wall Street is where the money is. Unless we separate money from politics, we’ll never be safe from another financial meltdown. In fact, we’ll never really be safe. Read this fine book and get to work.”