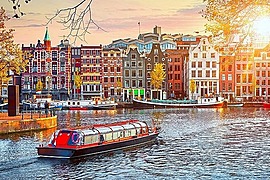 The Netherlands, informally known as Holland, is the most densely populated country in the European Union with a population of over 17 million people. Literally translates to “lower countries” in reference to its low elevation and flat topography, around 20% of the Netherlands is located below sea level. Although the country is mostly popular for its cheese, windmills and wooden shoes, the Netherlands also attracts visitors for the Dutch architecture, art, and flowers - mostly tulips. The country is a highly-developed nation with strong exports in a number of industries, ranking among the world’s top five biggest exporters of agricultural and horticultural products. It’s also the healthiest country in the world for having the most plentiful, nutritious, healthy and affordable food. Holland also has the world’s highest museum density, with 3% of the Netherlands consisting of National Parks. The Netherlands ranks among the highest in international indexes of press freedom, economic freedom, human development and quality of life, as well as happiness. Some of the most famous tourist attractions in the Netherlands include Jordaan and Amsterdam’s Canals, Keukenhof, Rijksmuseum, Van Gogh Museum, De Hoge Veluwe National Park, and De Haar Castle.