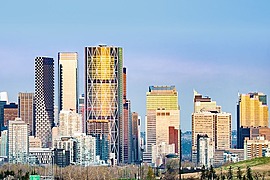 Calgary is the largest city in Alberta and the fifth largest in Canada. It offers all the energy of a large metropolitan city with the warm and welcoming spirit of a connected community. Calgary is listed as one of the cleanest cities in the world by Forbes Magazine. It was also ranked the most livable city in North America and the fifth most livable city in the world by the Economist Intelligence Unit.