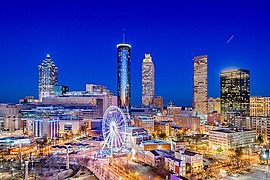 Atlanta is the capital of Georgia. The most populous and primate city in the state of Georgia, Atlanta serves as the cultural and economic center of the Atlanta metropolitan area. It ranks in the top twenty among world cities and 10th in the nation with a gross domestic product (GDP) of $385 billion. Atlanta's economy is considered diverse, with dominant sectors that include aerospace, transportation, logistics, professional and business services, media operations, medical services, and information technology. With an estimated population of over 500,000, it is also the 37th most populous city in the United States.