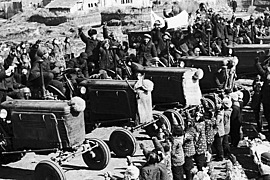 The Great Leap Forward, also known as the Second Five Year Plan, was an economic and social campaign led by the Chinese Communist Party, to organize China’s industrial and agricultural problems. With the aim to collectivize agriculture and widespread industrialization to increase grain and steel production, The Great Leap Forward resulted in a sharp contraction in the Chinese economy. It was considered as the largest single, non-wartime campaign of mass killing in history, with episodes of mass killing resulting in 30-55 million deaths by starvation, execution, torture, forced labor, and suicide out of desperation. It resulted in massive quantities of goods and materials not being translated to output final goods - a clear example of the failures of socialism and economic central planning.