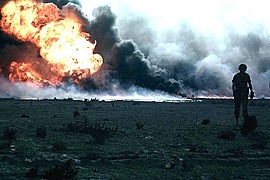 The 1990 Kuwait Invasion was an overwhelming attack by more than 100,000 Iraqi troops equipped with tanks, helicopters and trucks across the border of Kuwait. By annexing Kuwait, Iraq gained control of 20 percent of the world’s oil reserves and, for the first time, a substantial coastline on the Persian Gulf, acquiring Kuwait’s large oil reserves, canceling a large debt Iraq owes Kuwait, and expanding Iraqi power in the region. Relations between Iraq and Kuwait, which had supported Baghdad financially during the Iraq-Iran War, had deteriorated rapidly in the previous months. The invasion of Kuwait set off a chain of events with repercussions that continue today. It shattered forever the idea of Arab unity and fragmented the Arab world.

More about 1990 Invasion of Kuwait

Impact on Price of Oil

Why Did Iraq Invade Kuwait