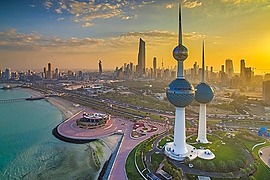 Kuwait is a constitutional sovereign with a semi-democratic political system, with a population of over 4.8 million inhabitants. With a free economy compared with its Middle Eastern neighbors, Kuwait ranks highly among its regional counterparts in the protection of civil liberties, press freedom, and constitutionalism. Kuwait has a high-income economy backed by the world’s sixth largest oil reserves, with Kuwaiti dinar being the highest valued currency in the world. Kuwait’s economy is mostly driven by petroleum and fertilizers as their main export products, with other major industries including construction, shipping, cement, water desalination, construction materials, and other financial services. Kuwait is home to the largest opera house in the Middle East, and the Kuwait National Cultural District is a member of the Global Cultural Districts Network.