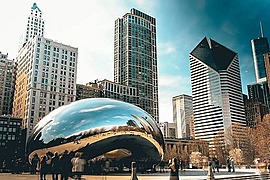 Illinois, also known as the Prairie State, is the 25th largest state in the country, and the 6th most populous with over 13 million people. With their best known natural resources as fertile soil, Illinois is known for their forests, farmlands, wetlands, and hills, particularly famous for the Illinois bundleflower, Illinois rose, and leopard lily. In contrast with their fields, Illinois is also famous for their Chicago skyscrapers, considered as a global city. Illinois is also recognized as the home of The Chicago River, the world’s only river that flows backwards, and Chicago’s Museum of Science and Industry, which contains the world’s largest pinball machine and miniature castle. llinois was the first state to ratify the 13th amendment to abolish slavery. The state is known in the service industry, manufacturing, agriculture, and mining.