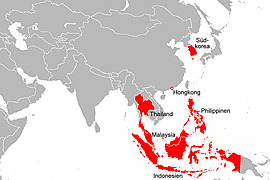 The Asian Financial Crisis, also known as the Asian Contagion, was a series of currency devaluations that began in 1997, spreading through many Asian countries including Thailand, Philippines, Malaysia, South Korea and Indonesia. A macroeconomic shock, it started in Thailand, causing stock market declines, reduced import revenues, and government upheaval. With the devaluation of Thailand’s baht, a large portion of East Asian currencies fell by as much as 38 percent, leading to international stocks’ decline of almost 60%. The financial crisis has forced many nations to adopt protectionist measures to ensure the stability of their currencies. The International Monetary Fund (IMF) and the World Bank helped stabilize these nations’ currencies, that led to several years of rapid economic growth, capital inflows and build up of debt, which led to an unbalanced economy. The Asian Financial Crisis had long-term effects such as current account deficits, fixed or semi-fixed exchange rates, financial deregulation, moral hazard, and over-exuberance.