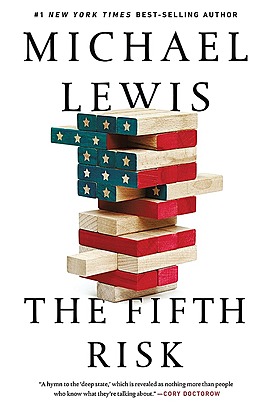 The Fifth Risk is a brilliant narrative that takes us into the engine rooms of a government under attack by its own leaders. It addresses the devastating consequences if the people given control over the government have no idea how it actually works. The government administers a broad spectrum of critical services that keep the people safe and ensure the availability of food and drugs whenever anyone needs them. The government also looks over predicting extreme weather events to tracking and locating black market uranium before the terrorists do. In Fifth Risk, dangerous fools and unsung heroes are revealed. They are the linchpins of the system, those public servants whose knowledge, proactivity, and dedication keep the machinery running.

More about The Fifth Risk

“[A] page turner.… [Lewis'] most ambitious and important book.”

“Fascinating―and at times harrowing…. Lewis tells an important and timely story, one that all of us who pay for, care about, and want government to work should hear.”

“A hymn to the 'deep state,' which is revealed as nothing more than people who know what they're talking about.”

“[A] spellbinding, alarming analysis of the most serious threats to Americans’ safety happening now from inside the U.S. government.”

“Displaying his usual meticulous research and fluid prose, [Lewis] makes the federal bureaucracy come alive by focusing on a few individuals within each agency with fascinating―and sometimes heartwarming―backstories.…[A] well-written primer on how the government serves citizens in underappreciated ways.”

“Illuminating.… It's relevance to readers won't end with the Trump era.”