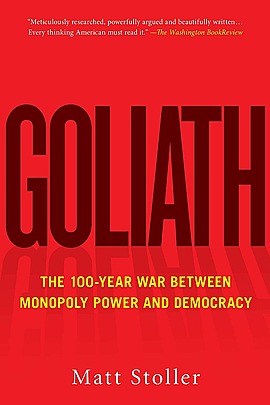 Goliath explains how authoritarianism and populism have returned to American politics for the first time in eighty years, as the outcome of the 2016 election shook our faith in democratic institutions. Today’s bitter recriminations and panic represent more than just fear of the future, they reflect a basic confusion about what is happening and the historical backstory that brought us to this moment. The author illustrates in rich detail how we arrived at this tenuous moment, and the steps we must take to create a new democracy. 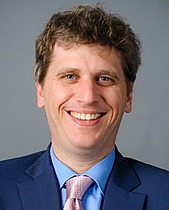 "Goliath shows that a history of antitrust in the United States is ultimately a story about who we are as Americans, the limits we can place on private power, and the government's ability to be a force for fairness and justice. The breadth and depth contained in this book are unlike any book written on the topic in recent memory—it is the kind of big economic history that the moment needs."

“Goliath is an impressive and fun book telling the long-forgotten but critical history of how freedom, not just from coercive government but from coercive corporate monopolies, is an essential part of American business.”

"Matt Stoller's Goliath is a remarkable and fun story about corporate power in America. Stoller brings to life pivotal political fights over banks and monopolies, fights that took place in board rooms, in hearing rooms, and in mass protests. Highly recommended."

“Matt Stoller has written a fascinating, deeply researched and almost hypnotic tale of the often tense relationship between corporate power and democracy. It has obvious parallels to where we are today, and lessons to be learned as we work to once again make democracy work for the people. Stoller’s documentation of this lost history is more important than ever as we deal with the effects of the financial crisis and deep-seated poverty, the growing power of technology companies and the extraordinary gap that exists today between the richest few and everybody else."