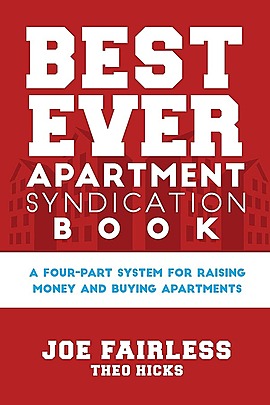 The Best Ever Apartment Syndication Book introduces a step-by-step system on creating a multimillion dollar worth of apartment investment empire. It also covers how to achieve and complete your first apartment deal. Whether you don’t have prior real estate experience, or doesn’t have access to private capital, this handbook will get you through all the phases. Ultimately, The Best Ever Apartment Syndication Book provides you precise methods on how to make a fortune through apartment investments.

"If buying large apartments feels daunting, Joe has developed a practical, proven strategy to provide a clear roadmap for success. I've successfully employed these strategies and watched numerous others do the same to raise millions to acquire apartments."

"Joe's apartment syndication system has been instrumental in my success and has exponentially accelerated my timeline. It has helped me eliminate limiting beliefs and has given me the confidence to pursue transactions much larger than I envisioned. In the 18 months since I've learned he principles outlined in this book, I've partnered on 437 units and our newly formed company has been the lead sponsor on 261 units (with another 587 units under contract). Most excitingly, I've recently been able to leave my day job as a tax attorney and become a full-time multifamily investor."

"By following the processes outlined in this book, my real estate portfolio went from $2 million to over $7 million in one year."

"After applying the principles Joe talks about in this book, we've been able to build a 700-unit (and growing) portfolio."

"Learning and applying Joe's apartment syndication principles has 10X'd our company Viking Capital. Starting with a $6 million deal as our first project, we now have just purchased a 268-unit $35 million deal. Joe's apartment syndication system simply works. He is humble but ambitious, conservative in his analysis but delivers explosive growth, all while being charitable with his time and resources. I am proud to call him a friend and mentor. This book will level up your real estate career. Jos is an unstoppable tour de force!"

"I've known about Joe's apartment syndication principles for approximately a year and have achieved more than I expected to accomplish in that time. The principles in this book have helped me reach my goals faster and with more confidence than I anticipated"

"Summer of 2017, I was walking out of a failed business attempt looking where to go from there. After listening to 'Best Real Estate Investing Advice Ever Show,' I contacted Joe Fairless for syndication advice. After explaining my history and lack of Real Estate background, he provided me with the principles outlined in this book. Joe is a one-of-a-kind guy. His principles have taught me more than I ever imagined. I have been able to close 106 units within 12 months. If you're looking for Real Estate knowledge, I would give this book an A+. Thank you, Joe"

"10 months ago, my son and I learned about the principles outlined in this book and nothing has been the same since. We followed every step of Joe's instructions and advice, which helped us close on our first deal, a 261-unit apartment community in Houston. If you told me 10 months ago that we would own 261 units valued at $15M and that I would have personally raised $1..75M I would have said you were nuts! Joe's process is very comprehensive and engendered a lot of confidence that we could do the same thing as the people we were listening to on Joe's podcast. So much so that we already have another property in escrow, a 587-unit property in Houston."

"Joe's simple yet powerful principles helped me uncover my ability to build deep investor relations and successfully raise millions for apartment community investing. My journey from CTO to commercial real estate would have been tough without the systems outlined in this book."