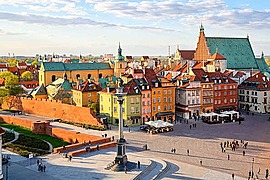 Warsaw is the seventh-most populous city in the European Union, and the capital and largest city of Poland with a population of over 1.8 million residents. Known as the Phoenix City for its destruction and restoration from scratch due to World War II, Warsaw has become an alpha global city, a major cultural, political and economic hub, and international tourist destination. Warsaw is a major global city that links economic regions into the world economy, renowned for its bars, restaurants, art galleries and, most notably, several dozen museums and outspread greenery, with around a quarter of the city’s area occupied by parks. It is also one of the most important education centers of Poland, home to four major universities and over 62 smaller schools of higher education, and shelters over 30 major theatres that are spread throughout the city, including the National Theatre and the Grand Theatre in Warsaw. The city is also full of attractions including The Old Town, which is one of the most prominent tourist attractions in Warsaw, Royal Lazienki Museum, Palace of Culture and Science, Warsaw Rising Museum, Fryderyk Chopin Museum, and Warsaw National Museum.