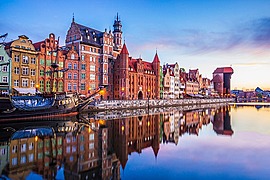 Poland is the fifth most populous member state of the European Union with a population of nearly 38.5 million people. The country has a highly developed, and high-income economy, alongside a developed educational system, social security, and a universal health care system. Poland has a very diverse nature with beaches, mountains, forests, deserts, and lakes. The country also boasts the Wieliczka, the only mining site in the world that has been continuously functioning, and home to 16 impressive World Heritage Sites, including the Malbork, the world’s biggest castle. Poland has a developed market and is a regional power in Central Europe, with the 6th largest economy in the EU, and the 10th largest in all of Europe. With one of the most dynamic economies in the world, Poland’s economy is based on wholesale and retail trade, transport, accommodation and food services, public administration, defence, education, and social work activities.