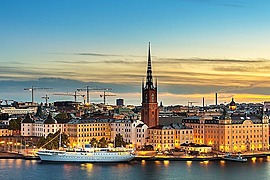 Officially known as the Kingdom of Sweden, it runs a constitutional monarchy and parliamentary democracy, that pursued a successful economic formula consisting of a capitalist system intermixed with substantial welfare elements. With a population of over 10 million, Sweden is the largest country in Northern Europe, and the third-largest country in the European Union. Sweden’s small, open, and competitive economy has been thriving and Sweden has achieved an enviable standard of living with its combination of free-market capitalism and extensive welfare benefits. Sweden is 63% forest, and 54.5% renewable energy, with its most important export goods consisting of vehicles and machines, pharmaceuticals/chemicals, electronics, minerals, wood products, energy, foods, shoes and clothes.