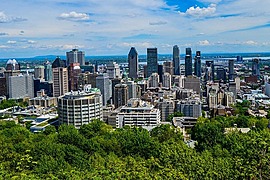 Montreal is the first North American city to have been designated UNESCO City of Design by the Global Alliance for Cultural Diversity in 2006. With this honor, Montreal’s effort and enthusiasm, as well as the city’s potential for economic and social development, in the field of design are recognized. It is also the second-largest French-speaking city in the world, after Paris. It has the highest number of restaurants per Capita in Canada and the second in North America after New York.