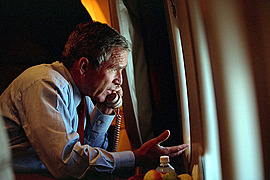 The 2001 Recession is an eight-month-long economic downturn with various causes such as the dotcom bubble collapse, the 9/11 attacks, the Y2K scare, and a series of accounting scandals at major US corporations, resulting in this relatively mild contraction of the US economy. With a GDP decline of 0.3% and Peak Unemployment Rate of 5.5%, the recession affected the European Union during 2000 and 2001. Commentators also claimed that the 2001 Recession was unique, with its run-up not characterized by an accelerating rate of price inflation. In response to the 2001 recession, the Federal Reserve sharply reduced the federal funds rate.