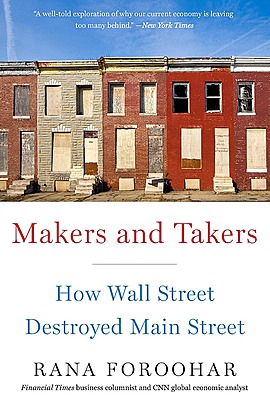 Makers and Takers explores the confluence of forces that have led American businesses to favor balance-sheet engineering over the actual kind, greed over growth, and short-term profits over putting people to work. From the cozy relationship between Wall Street and Washington to a tax code designed to benefit wealthy individuals and corporations, to forty years of bad policy decisions, this book shows why so many Americans have lost trust in the sys­tem, and why it matters urgently to us all.

More about Makers and Takers 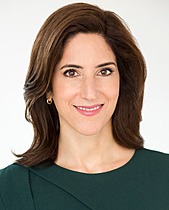 Praise for Makers and Takers

“Foroohar demystifies the decline in America’s economic prominence, showing that the competitive threats came not from the outside—migration or China—but from within our borders. She explains how finance has permeated every aspect of our economic and political life, and how those who caused the financial crisis wound up benefiting from it.”

— Joseph E. Stiglitz, Nobel laureate in economics and former head of the Council of Economic Advisors

“A fast-paced, exciting, and well-researched tale that brings alive the shady dealings that have been part of the recent rise of finance (the takers). Wall Street has prospered beyond measure by consuming far too much of the value created by the real economy (the makers). Readers will be shocked by the shenanigans that are revealed, and then eager to help fix what has been so badly broken. It’s up to us—all of us.”

“In this well-written, refreshing, and provocative book, Rana Foroohar analyzes how Wall Street went from an enabler of prosperity to a headwind to growth and a contributor to inequality. This engaging analysis identifies five key policy areas that will rightly be the subject of debate and, hopefully, some political action. This is a must-read for those looking to better understand how, why, and when financial engineering went too far, and what to do about it."

“There is no bigger question in public policy than whether the emergence of an ever-larger financial sector has made for a smaller and less equal society. Makers and Takers provides an intellectually compelling, and beautifully written, answer to that question, one which policymakers cannot and should not duck.”

— Andy Haldane, Chief Economist and Executive Director of Monetary Analysis and Statistics at the Bank of England

“Rana Foroohar offers a sometimes maddening, thoroughly fascinating look at the financial sector’s outsized role in the US economy and what it means for America’s future. This is a critical story that speaks directly to the ways in which banks are stripping businesses of their potential—and to the income inequality that increasingly defines our times.”

— Ian Bremmer, Founder and Head of the Eurasia Group

“Foroohar is one of the rare journalists with the insider knowledge and contacts, as well as the deft writing touch, to criticize the “financialization” of the US economy in a way that will sound credible to Wall Street, and readable on Main Street. In this fast-paced book she makes a compelling case for how businesses have come to focus more on engineering their finances than engineering good products, and the negative effect this has on US growth and productivity."