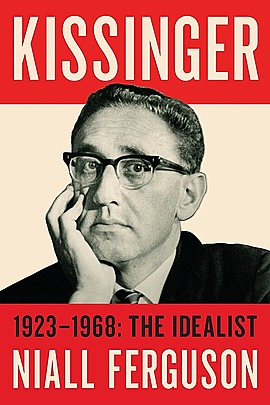 Kissinger is an essential account and definitive biography of Henry Kissinger. Based on unprecedented access to the indispensable man’s private papers, this book sheds dazzling new light on an entire era. Once hailed as “Super K,” Kissinger's advice has been sought by every president from Kennedy to Obama. This magisterial two-volume biography draws not only on Kissinger’s closed private papers but also on documents from more than a hundred archives around the world. Ultimately, this book proves that the idea of Kissinger as the ruthless arch-realist is based on a profound misunderstanding.

“Magisterial. Like Mr. Kissinger or loathe him, this is a work of engrossing scholarship.”

“Mr. Ferguson offers a remarkably rich discussion of Mr. Kissinger’s strategic thought and of how it took shape over time… The book… is well worth reading as a corrective to harsher historical judgments of Mr. Kissinger.”

"Combine careful and extensive scholarship, clear writing, and a magnificent subject and you get Niall Ferguson on Kissinger, a genuinely educational read.”

“When an accomplished historian writes about one of the world’s great diplomats, the results are sure to be a masterpiece -- and that is exactly how to describe Niall Ferguson’s epic on Henry Kissinger.”

“This is a terrific biography, and a must-read for understanding the evolution of one of the most important and compelling architects of American foreign policy of our age.”

“Ferguson’s biography will be a classic. This is a story of an influential, complex, and shrewd historical figure set in the context of the drama of America and the world in the mid-20th Century. Ferguson’s research is fresh and revealing, his writing is a pleasure to read, and his insights are sharp and thought-provoking.”