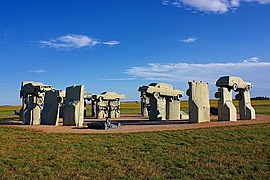 Nebraska, also known as the Cornhusker State, has a population of over 1.9 million people. The only state in the country with a unicameral legislature, its capital is Lincoln, and its largest city is Omaha. With a large agriculture sector, the state is also known as the Breadbasket of America, due to its fertile soil for growing crops. Nebraska is also a major producer of beef, pork, and corn, and other important economic sectors include freight transport, manufacturing, telecommunications, information technology, and insurance. With a diversified manufacturing industry, it also ventures in clothing, farm machinery, and chemicals. Among Nebraska’s tourist attractions include Agate Fossil Beds, Homestead, and Scotts Bluff National Monuments, Hastings Museum, Joslyn Art Museum, and Stuhr Museum of the Prairie Pioneer.