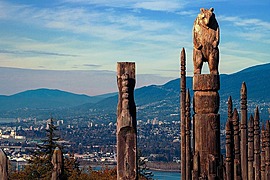 The city of Burnaby is at the geographical heart of the Lower Mainland. It is situated between two other major metropolitan areas: Vancouver and New Westminster and has the third largest population in the province of British Columbia. It is intersected with two major rapid transit lines, each featuring a variety of large retail shopping and high-rise condominium living for the sophisticated city dweller. Locals and visitors are delighted to the city's fine dining, featuring crowd favorite ethnic foods. The city is also known for its excellent primary and secondary schools.