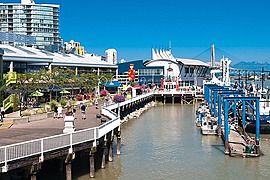 New Westminster is Western Canada’s oldest city. Named by Queen Victoria, the Royal City is the revitalized and trendy hidden gem of British Columbia. It is a historical and cultural hub which has something for everyone, from food and shopping, to arts, theater, and live entertainment. Whether by land, by sea or air, New Westminster is the central West Coast destination.