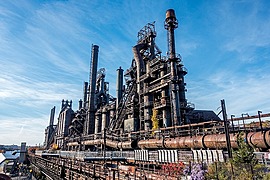 In 1937, the renowned huge wooden star and the city's Christmas street lights were lit up in a highly attended grand ceremony which was aired on radio by thousands of people. This was the same year the city Bethlehem was monikered the "Christmas City, USA." It was a vital location for the heavy industry during the Industrial Revolution. Bethlehem Steel was established in 1904 and was the first company to manufacture the popular "I-beam" and was a prominent supplier of armor plates and armaments during World War I and World War II.