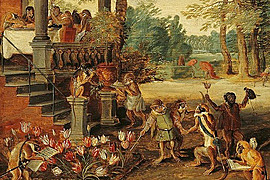 In the mid 1500s, tulips were introduced to the Netherlands from the Ottoman Empire and since then have held a significant role in Dutch history and culture. So firm was the Dutch love affair with tulips throughout the Dutch Golden Age of the mid-1600s that a tulip bulb bubble or "Tulip Mania" even occurred. Generally considered to be the first recorded financial bubble, the Tulip Mania of 1636-1637 was an episode in which tulip bulb prices were motivated by speculators to incredible heights prior to collapsing and dipping the Dutch economy into a grave crisis that endured for many years.