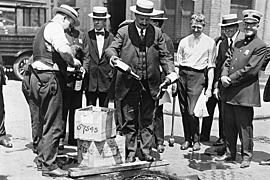 Prohibition in the United States is the 18th Amendment of the US Constitution that banned the manufacture, production, importation, transportation and sale of intoxicating liquors from 1920 to 1933. This period was described by President Herbert Hoovers as “the great social and economic experiment”, with some of the religious perspective labelling Prohibition as a social reform, an action to cleanse the American soil and restore the founding virtues of a dignified republic. The Prohibition era was also characterized as a period of gangsterism, competition, and violent turf battles between criminal gangs, instinctively associating it with images of Al Capone, and the Valentine’s Day Massacre. While some states refused to enforce Prohibition, it dramatically decreased the people’s drinking, and it continues in some parts of the country to this day.