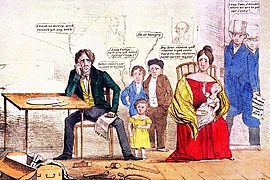 The Panic of 1837 was based on speculative fever. Inflation rose after federal deposits were withdrawn due to the assumption that the government was selling land for state banknotes of questionable value. It occurred after the overbuilding of canals and steamship lines in the 1820s and 1830s—lots of debt taken out. This crisis was followed by a five-year depression characterized by failed banks and unprecedented unemployment levels. The discovery of gold in California lead to a self-funded expansion and good times.