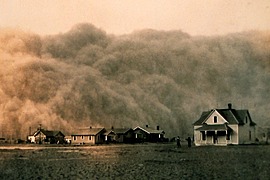 The Dust Bowl Drought, also known as the Dirty Thirties, was caused by high winds and choking dusts that swept the regions from Texas to Nebraska. Lasting for almost a decade, it was generated by several economic and agricultural factors, including federal land policies, changes in regional weather, farm economics and other cultural factors. The Dust Bowl intensified the crushing economic impacts of the Great Depression, wreaking havoc on U.S. agriculture and livestock, and driving many farming families on a desperate migration in search of work and better living conditions. It was considered to be “Drought of Record” for the nation, creating ecological, economical, and human misery to America during a period when it was already tremendously suffering under the Great Depression.