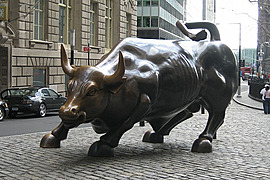 The Dot-Com Bubble, also known as the internet bubble, was a rapid increase in the US technology stock equity valuations fueled by investments in internet-based companies during the bull market in the late 1990s, with billions in venture capital given to entrepreneurs. During this phase, the technology-dominated Nasdaq index rose from less than 1,000 in 1995 to a peak of 5,408.60 on March 10, 2000, a period between 1995 and 2000 when investors pumped money into Internet-based startups in the hopes that these fledgling companies would soon turn a profit. The dotcom bubble grew out of a combination of the presence of speculative or fad-based investing, the abundance of venture capital funding for startups and the failure of dotcoms to turn a profit.