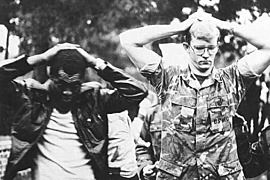 The 1979 Iranian Hostage Crisis is an international crisis, in which 52 American diplomats were held captive for 444 days. The hostage-taking was not just about the Shah’s medical care, but also about the student revolutionaries’ declaration of a stop with Iran’s past, and American interference with Iranian affairs. The Iranian hostage crisis undermined President Carter’s conduct of foreign policy, with the crisis dominating the headlines and news broadcasts, making the American Administration look weak and ineffective. It was also a way to raise the intra- and international profile of the revolution’s leader. The remaining US hostages were released on January 20, 1980, and flown to Wiesbaden Air Base in Germany. The terms of their release included the unfreezing of Iranian assets.