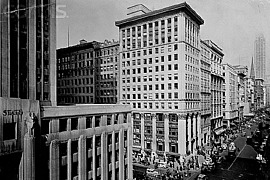 Established in 1884, the Knickerbocker Trust Company was the third largest of the New York trust companies. It was the firm whose near-collapse triggered the Panic of 1907. Just ten years before the crisis, the bank grew from $10 million in deposits to $61 million. The failure of such a prestigious financial institution inevitably caused the jitters to spread throughout the banking system.

In 1907, the Knickerbocker Trust Company funds were being used by then-president Charles T. Barney in a plan to drive up the cost of copper by cornering the market.

This gamble came undone due to the dumping of millions of dollars in copper into the market to stop a hostile takeover in an unrelated organization.

This became public, and on October 21, 1907, the National Bank of Commerce announced that it would no longer accept checks for the Knickerbocker Trust Company, triggering a run of depositors demanding their funds back.