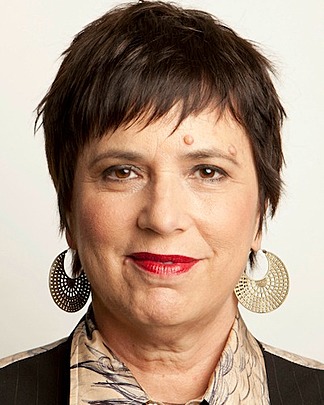 Eve Ensler, known mononymously as V, is the Tony Award-winning playwright, author, and activist for protecting women from violence. V is best known as the author of the Obie Award-winning theatrical phenomenon “The Vagina Monologues”, which has been published in 48 languages and performed in more than 140 countries. In addition, V is the Founder and Artistic Director of V-Day: Until The Violence Stops, a global effort to stop violence against women and girls, which has raised more than $120 million. V is the Founder of One Billion Rising, the largest global mass action campaign to end gender-based violence in over 200 countries. She is also the Co-founder of the City of Joy, the revolutionary leadership center for survivors of gender violence in the Democratic Republic of Congo. After publishing her book The Apology in 2019, where she described sexual and physical abuse by her late father, she stated she wished to distance herself from the surname he used and expressed her preference to be called by the mononym V. A survivor of violence, V has dedicated her life to ending violence against women and girls.

Eve Ensler is the author of