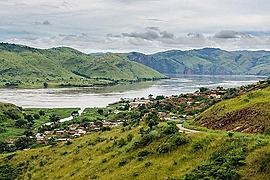 The Democratic Republic of Congo is the fourth most populous country in Africa, and the sixteenth most populous country in the world with a population of 84 million inhabitants. Known as one of the most resource-rich countries in the world with an abundance of gold, tantalum, tungsten, and tin, DR Congo’s largest export is raw materials. DRC has a vast cultural representation with over 200 ethnic groups, and nearly 250 languages and dialects spoken throughout the country. The country also hosts the United Nation’s largest peacekeeping mission in the world, with over 21,000 soldiers from approximately 50 different countries. Known as the Center of “Africa’s World War”, the Democratic Republic of the Congo ranked fifth most fragile state in the world, suffering from political instability, lack of infrastructure, corruption, with little widespread development.

More about Democratic Republic of Congo